#LegoMyBride: How to bake a cake and bring it up the mountain

When you are the maid of honor, and sole member of a bride's wedding party, you become you get tasked with quite a few duties. Between making the wedding invitations, sewing blue ribbon onto the dress and organizing the bachelorette party and bridal shower, your skills as a bestie get tested - and hopefully strengthened.

Last weekend, my best friends Michelle and Ryan got married on Palomar Mountain, and on top of my maid of honor duties, which I was happy to fulfill, I also got to make a two-tier, Lego-themed wedding cake and four cheesecakes for dessert.

Ryan and Michelle's two-tier cake is a chocolate cake with vanilla frosting and a peanut butter frosting filling. The couple wanted the cake to appear as if the Lego Minifigs were still rushing to put it together, so there they are using tiny tools to spread the frosting around and a dump truck is dropping off some extra frosting.

Since the wedding was held at a cabin in Palomar Mountain and we were spending the weekend there, I didn't want to lug all my baking equipment around with me, so I baked all of the components the day before the wedding with the plan of putting the cake together at the cabin. Unfortunately, I didn't make enough frosting and the tiny store on the mountain had limited supplies, but I improvised and used some homemade whipped cream for the borders on the cake.

Next time I make a cake at a remote location, I will be prepared with more frosting than I think I need.

As a side note, since Michelle is allergic to corn, I cannot use standard powdered sugar for frosting, so instead I use the Wholesome! organic powdered confectioner's sugar, which does not contain cornstarch. 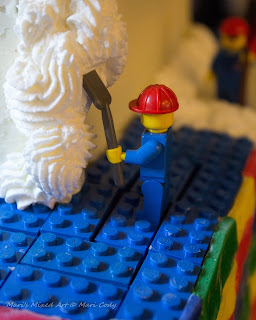 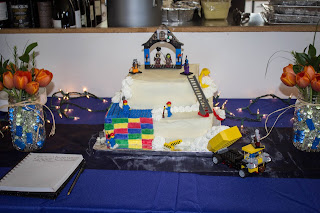 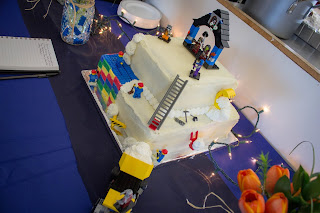 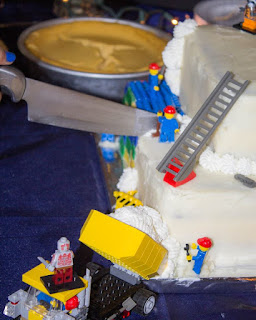