The Three Sisters: A brief look at how corn, beans and squash have sustained life and culture in Haudenosaunee communities 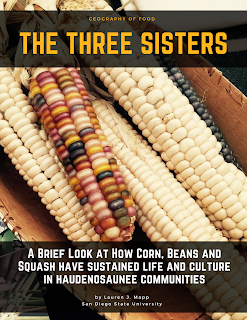 Corn, beans and squash are prevalent food staples in many of the indigenous cultures of the Americas, including the Haudenosaunee (the Iroquois Confederacy) of Northern New York State and southeastern Canada. This paper will mainly focus on Haudenosaunee traditions, but also includes some information on indigenous uses throughout the Americas. This project will include information about the cultural significance of food, traditional agricultural practices, the benefits of companion planting, a recipe, ceremonies associated with the three sisters and more.

The Three Sisters have been some of the main Haudenosaunee food staples since prior to European contact (Gray, 2017). Their creation is found in the Haudenosaunee oral origin stories. It is said that when the daughter of Skywoman (who fell from the sky and made the Turtle Island) died during childbirth, five plants grew where she was buried. From her heart grew strawberries, from her head tobacco, corn from her breast, beans from her kidney and squash from her naval (Gray, 2017). The Three Sisters are eaten in the Longhouse at many of our Haudenosaunee ceremonies and festivals, including the O'rhotsheri (green bean), Okahsero:ta (green corn), Kanen’shon:a (seed) and Ka'khowanen (harvest) ceremonies (Indian Time2015). The Longhouse, which was the multi-family clan dwelling for the Haudenosaunee precontact, is now predominantly used for ceremonial purposes (Bonaparte, 2000). Though I do not cook traditional dishes as often as I would like, I often try to incorporate the Three Sisters into my daily meals. Living in California, thousands of miles away from the Kanien'kehá:ka (Mohawk) reservations where my family is from (Akwesasne in Upstate New York and Kahnawake in Quebec), preparing and consuming foods such as Three Sisters rice and boiled cornbread is a way for me to feel like I am home again.

Today, there are Haudenosaunee farmers who grow the Three Sisters together using traditional, companion planting techniques. Companion planting is the method of growing specific plants together for higher yields, increased nutrient distribution and the prevention of soil erosion, among other benefits (Tinari, 2017). My ista (mother), Lorraine Kaneratokwas Gray, continues to grow these plants together on her farm in New Mexico.

Gray (2017) said the following about the significance of the Three Sisters:


The Three Sisters in the Mohawk language is Kiohehkwen, which literally means, ‘They give us life.’ That’s pretty much it in a nutshell. Corn, beans, and squash – along with wild game, strawberries and maple sap – were the main sustenance of the Mohawk people. Without them there would be no life. In areas where farms may receive excess rainfall, the seeds are planted into a mound in order to avoid the seeds - and later, the roots - from drowning (Gray, 2017).


In areas like the Southwest, where rainfall can be a rare commodity during many growing seasons, farmers may plant them in a sunken hole to help collect rain and water to nourish the plants (Gray, 2017). In some native cultures, such as the Wampanoag nation of Massachusetts, it is traditional to place a fish in the mound with the seeds as a fertilizer (Wampanoag Tribe, 2004). When the body of the fish deteriorates, the soil is fertilized as nitrogen is released (Wampanoag Tribe, 2004).

Once the corn is picked and dried, it is later processed in two ways so that human can consume it. The first method involved the pounding of corn in a hollowed out stump to break the dried kernels into corn flour (this is later used to make boiled cornbread and corn mush, depending on how fine it is pounded) (Gray, 2017). The second processing method involves boiling the dried corn with hardwood ash to break open the hulls on the corn kernels (a process formally known as nixtamalization) (Nelson, 2010). It is then strained and washed using a traditional corn-washing basket, which a utility basket with small holes in the base that allows water and the hulls to pass through (Gray, 2017). Once the hulls are removed, the softened corn is used in dishes such as corn soup and Three Sisters rice Gray, 2017).

Prior to colonization, salt and refined sugar would not have been present in our diets, so some dishes (such as corn mush) use raw maple sap, maple syrup or locally-foraged berries as a natural sweetener (Gray, 2017). Three Sisters Rice is an example of early forms of globalization: corns, beans and squash were readily available in the Haudenosaunee region, but the wild rice to make this dish would have been sourced through trading with nations in the western Great Lakes region (Gray, 2017). Wild rice is referred to as Manoomin, “the food that is grown on the water,” to the Anishinaabe people who collect it in the Great Lakes region today (White Earth, 1999).

Whether being eaten for ceremonial purposes or for brunch on Sunday morning, corn, beans and squash continue to be an important part of Haudenosaunee culinary culture.

1. Start boiling a large pot of water.
2. Mix flour and salt (if using).
3. Mix in beans and slowly mix in water until the dough sticks together firmly. Be cautious not to
add too much water, and depending on the weather you might use more or less than suggested.
4. Roll balls of dough, then flatten against the table to make a burger-like patties that are 3-4 inches across.
5. Boil cornbread for 30 minutes until they rise to the top of the pot and are cooked all the way through.

Serving Suggestions:
It has emerged as a modern tradition to serve boiled cornbread with brown gravy and steak for Sunday brunch. To incorporate the third sister, you can serve the cornbread with sauteed or roasted butternut squash.

*Note: It is not traditional to use salt, but many people do today to please modern flavor preferences.